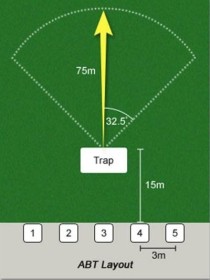 Automatic Ball Trap (most commonly referred to as Wobble Trap) is a domestic shooting discipline governed by USA Shooting.

ABT uses a single trap set in a trench, with the trap constantly oscillating in both the horizontal and vertical planes. The target is released immediately when a shooter calls and it will be thrown at whatever angle the trap is facing when the call is made. This means that the path of each target is totally random and cannot be predicted by the shooter. It also means that every round is different and each shooter will receive different targets from everyone else.

Each round of ABT consists of 25 single targets with two shots allowed at each one. A simple points system is used for scoring with a single point awarded for each hit, regardless of whether it was the first or second shot. Most domestic competitions are shot over four rounds making a total score out of 100.

Because ABT only requires one trap it offers a big advantage in terms of cost and space over other disciplines such as Olympic Trap. It is therefore quite popular and can be found at many shotgun shooting ranges.

ABT is usually shot in squads of six over five stands using a 'shoot and move' method where the shooter moves to the next stand to their right after taking each shot (stand five moves round to wait behind stand one).

How is Automatic Ball Trap set up?

ABT requires a single oscillating trap set in a trench 15m in front of the shooters. There are five shooting stands (each 1m square) set 3m apart.