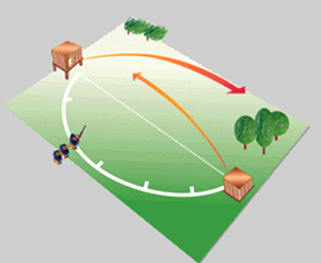 American skeet is shot from seven stations on a semicircle with the eigth station in the center of the field on a straight line between the high and low house. The course of fire is a high and low single followed by a simutanius pair on stations 1&2. A high and low single on stations 3,4&5. A repeat of the same sequence of targets of stations 1&2 on stations 6&7. If the competitor has not shot his or her option shot on the fist miss of the round the shooter will have one high single and two low house singles from station eight.

If you want to shoot better in the field, enjoy a day at the gun club, or compete with the top skeet shooters in the world for honor and glory, then skeet shooting is a great sport.